The chapters are much shorter than I recall. And less exciting?

The trolls and the elves get almost no physical descriptions, readers know what they look like “of course.” All we’re told is what they say and more specifically, how they say it.

The trolls use obviously accented, lower class language and wipe their mouths on their sleeves. A quick google indicates it’s Cockney (I’m not from the UK, I can’t always tell). The elves sing, ugh. But the elves are scholarly and use proper, even posh English.

“Just look! Bilbo the hobbit on a pony, my dear! Isn’t it delicious!”

Elves actually, not trolls. Both want to eat him up, but in different ways…

It’s the drawing above that at least gives some indication of what the trolls look like, with an appropriately Scandi feel, although the line work is *very* busy. I like the swirl of the fire but the dottedness of the trees, trolls and ground is a little overwhelming. But props to Tolkien, illustrating his own book.

Useful things I learnt: trolls turn to stone in sunlight. In my mind, that makes them sort of like vampires? Should someone write Troll: The Masquerade? Has someone done this already? How many other fairytale creatures are affected by sun/daylight? It’s these types of details that every nerd should know! (jk)

More commentary, as I read.

You know the deal.

The Hobbit’s famous and the whole Middle Earth thing has inspired so much nerd and gaming culture.

Despite hanging out with nerds most of my life, I’ve never read Tolkien … or more accurately, I’ve never got through a whole book without getting bored.

With the need to stay inside for the 2020 corona virus pandemic, I’m finally gtting around to all the things I’ve been putting off, including (re-) reading The Hobbit.

This is what has struck me – it’s so much like The Wind in the Willows, which I read (& ended up liking) as a child. Here are the parallels:

And that’s only the first chapter!

Tune in next week (or sometime later) for my reactions to the next few chapters of The Hobbit.

I don’t love it so far – Bilbo feels annoyingly passive, the other characters feel pushy and uncaring. Reading it now, the class consciousness is grating.

I’m Kon Mari-ing the blogs I follow so hard that it hurts.

They wrote craft blogs, intertwined with glimpses of their lives. Are they still sitting there, behind their screens, just like me? Not knowing where to go now that most of the amateur craft blogs have professionalised, found their schtick and SEO-ed the heck out of themselves?

Did professionalism kill the craft blog?

Do they still have things to say? Probably! I followed some of those women onto Instagram, and they’re still thoughtful, funny women. They’re still making things, whenever they find the time.

Is there something about the professionalisation of blogs that makes amateur, non-commercial efforts seem pointless now? Is their style of blogging no longer supported, respected? And have the tools, the technologies behind blogging, moved on without them?

Is social media the problem?

Blogs need readers, of course. Without Google Reader, readers only find blogs via social media promotion. Re-tweets and Likes. Quiet, personal blogging isn’t something that’s easy to promote on social media – how do you ask people to re-tweet your confessions of craft failures? Can you ask (generally friendly) readers to like your musings on the difficulties of parenting? Particularly if you don’t offer a glib solution at the end, or push a product?

I know what you’re thinking: Instagram killed blogs. Maybe it did. I’ve always wondered if Ravelry killed knit blogging – my main reason for reading knit blogs was to find out what patterns looked like on a real person, and Ravelry does that. Ravelry does that so very, very well. There isn’t a sewing Ravelry (yet), but it’s true most of the crafting action has moved to Instagram. I’ve been Instagramming myself, since August 2012. Six hundred and sixty-four posts so far. I guess it’s easy.

I’m still not convinced Instagram is the full answer, ‘tho. In its heyday, Flickr co-existed with blogs. Sure, Flickr allowed links in a way Instagram doesn’t, a significant change in technology. But is that the full explanation? Was it the double-whammy of the end of Google Reader and Instagram’s rise?

Maybe. But I’m not convinced blogging platforms have tried or succeeded in being as easy to use as Instagram/Tumblr/Facebook. And culturally, I feel, we haven’t found a good format for short, easy but still insightful posts. Except perhaps Buzzfeed (which has a good reputation in Australia) – more on that later…

In contrast to craft blogs, the fashion blogs I followed have sped up astonishingly – posting not once, not twice, but many times a day. But many of their posts are simply link lists, re-worded press releases and the like … the voices of the authors are gone now, replaced by a sanitised, corporate voice. Quirks and strong opinions erased. Advertiser-friendly.

No, I don’t know what the solution is either.

Confession time: I stopped reading blogs about 18 months ago. In contrast to my previous 100 per day skimming habit. Maybe I got busy? But I was busy before. Maybe I missed Google Reader? But I was already surviving without it…

I just didn’t want to read blogs anymore. I was overwhelmed. The shallow fashion posts were drowning out the dwindling craft posts. I couldn’t find what I wanted in my reader, even though I still liked most of the blogs I was following.

Making room for the future

Hence the brutal Kon Mari. Rachel Hauser has discussed the changes to blogging recently, and I was really struck by what one of her commenters said. Maybe I’ve just missed out on following the next wave of bloggers. So I’m making room for them. And thinking about my own blogging … and planning a Buzzfeed-style, short, easy and casual approach.

As casual as I can be, having written something as long as this! 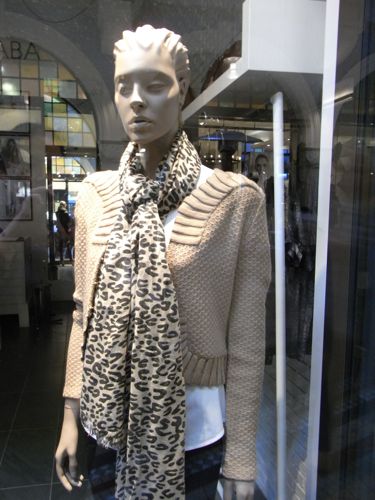 I love knitting, so I’m always keeping an eye on knitwear in the shops. I guess the shops I’m walking past each day would be classified as the Australian ‘high street’ (whatever that term really means) or perhaps contemporary designer? Must say the knitwear I’m seeing has improved, compared to around 5 years ago when I first started taking note. I’m not seeing so many knits stretching and sagging off the hangers, these days.

Clever knitwear always makes me smile. Here, I like the idea of ribbing used as contrast and decoration, not just as utilitarian edging. The ribbing’s curved, even along the shoulders in a kind of boatneck style. I often appreciate fashion ideas that might be somewhat awkward to wear … but this isn’t one of them. The ribbing gives a little more style to an otherwise simple, neat jacket.

The photo is from SABA, about a month ago. The next day they covered the mannequin with an even bigger scarf, so I couldn’t see the knitwear detail anymore. I suppose the jacket’s probably on sale now or even sold out (I can’t see it in their online store). 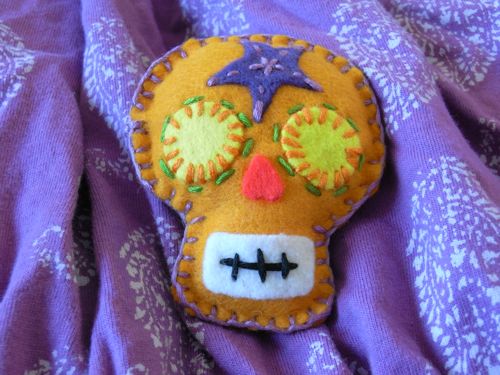 I went to a Crafternoon, and made this little skull. But it’s not the important bit… I loved it, the chance to talk with some great women.  About adult things.

I didn’t know anyone else there, except the hostess.  So it could have been really akward. Instead, it was affirming, to find out how much we had in common. To explore where our perspectives met, and where they divered. We talked like adults, I’ve missed that! We didn’t talk in the coded way parents must, when they know children are nearby, listening. And yes, we did discuss our children, amongst other things.

Best of all, we were able to move from the personal to the political. So often, with mothers I know well, who I see everyday, we just swap anecdotes and personal stories. Without drawing the political conclusion, making the link to what’s going on in society. I’m sure we all see it, but we don’t say. This Crafternoon, it was refreshing to say it.

I spent quite a while deciding whether my skull badge should have googly eyes. It looked cute with… but scarier, more real without.