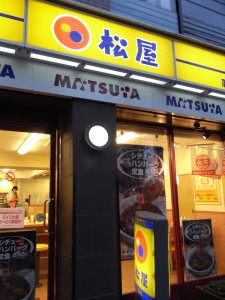 I’m assuming you want to feed a family of 2 adults, 2 very small kids for around Â¥3000, or one adult for under Â¥1000. With yen, ignore the last 2 zeros (there are no yen cents) and then factor in your currency’s most recent fluctuation … ugh!

I also won’t bother explaining where these alternatives are located, but the first 2 are everywhere, often several of the same shop within 5 minutes walk.Â  If you look around near the train station, you’ll probably see them (and in central Tokyo, when aren’t you near a train station???)

Yoshinoya and Matsuya are pretty similar: basically, very thin sliced but fatty meat with rice. Enlivened with sauces, curry, or Korean-style condiments. Salads and semi-cooked eggs as extras, or maybe included in the set. Water and/or tea if you eat in, free miso soup at Matsuya. Doesn’t sound enticing? Not high quality? Well, what do you expect at a direct competitor to the American chains, where average sized meals are about Â¥600? And at least it’s an experience you wouldn’t have had at home. 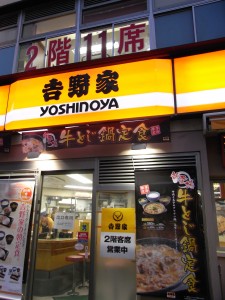 And about meat, there isn’t much. Dishes described as ‘meat and spaghetti’ will be mostly spaghetti and tomato, with a smear of meat. Don’t be like all the tourists I’ve met who complain they were ripped off: you weren’t ripped off unless you paid at least Â¥2000 for red meat. And portion sizes are smaller, they just ARE, so take that into account when looking at the menu’s photos.

I’ve already mentioned I really like Denny’s Japan: a bit pricier (Â¥1000 for a good meal for one), but very good quality food, very fresh. Fair sized meat and bread options (shock!! not everything comes with rice!!).